Timelapses have become more and more sophisticated – and Daniel Lowe's “Night Motion Timelapse: Outer Banks” is no exception. Daniel spent time creating a beautiful movie and has graciously also put together this post for planet5D with his lessons learned in creating this masterpiece. This time, we decided to give you the discussion of the movie before showing it to you – so first up is Daniel's BTS and then the movie is below.

For me, this all started with Tom Lowe's “Mountain Light”. (vimeo.com/6686768). I'd seen time-lapse cinematography before; thinking of it as a cool film trick, not much more. I had never heard of Godfrey Reggio's work at that time.

A few months later, I got a Canon 7D. A real workhorse, a versatile, powerful HD-SLR. I got a Satechi intervalometer. I worked on my timelapse, especially my night timelapses.

After months of progress, I made a 5 minute film called “Eye of the Beholder” (vimeo.com/13794271) with a Canon 7D + Tokina 11-16mm f/2.8 lens. I learned how to be a better photographer, gaining experience with lighthouses, stars, sunrises & sunsets. No motion control yet; I was still learning how to pan and zoom in my video editing software.

A breakthrough in the quality of my work was getting a large, 32Gb CF memory card and being able to shoot every single timelapse as a RAW sequence. This gives you so many options in post-processing. Shooting RAW; if you get your shot right, you have just captured potentially extremely high resolution sequences that can be processed in nearly infinite ways. You can decide later in the comfort of your office on a real monitor, exactly what you want the scene to look like: white balance, color grading, highlights, shadows, contrast, etc.

After watching Brad Kremer's “Hayaku” (vimeo.com/12112529), and Dustin Farrell's “Landscapes: Volume One” (vimeo.com/16198274) I decided getting motion control into my work was absolutely urgent. I got a comment on my videos about a company called Dynamic Perception, and I started researching their motion control products.

Last winter, I bought an Orion Teletrack AZ-G telescope mount to use for panning/tilting, but it sat unused until I got the MX2 Controller as part of the Stage Zero dolly kit from Dynamic Perception in February 2011. (dynamicperception.com)

For a few months after that, my mind could not rest. I knew now I had the potential to do all kinds of cool incredible things with the new motion control gear. I also knew that I would need some time to learn what I was doing with all of these new toys.

I took small steps at first. I did a sunrise motion timelapse on the beach. We carried the dolly, 2 tripods and a motorcycle battery, half mile up a vertical switchback trail to a waterfall so I could stand in 40°(F) water until my feet went numb. I tried to get a little more creative each time; these were opportunities to learn more than anything else. I came to understand how to move the camera, and how to adjust the aperture selectively to focus on subjects during moving sequences.

About that time, I watched Randy Halverson's “Sub Zero” (vimeo.com/20062206). This brought me back to astrophotography timelapse; now I had motion control gear and a full-frame Canon 5DmkII.

After seven trips to Radio Shack (and a bad burn from a soldering iron), I finally created a custom interface cable for the MX2 to control the Orion teletrack.

I started thinking about a location near me for astrophotography. The Outer Banks was a natural, unlike most places near the East Coast, it has very dark skies with little light pollution. I went to Salvo, N.C. under the new moon in April and took the test shot below: 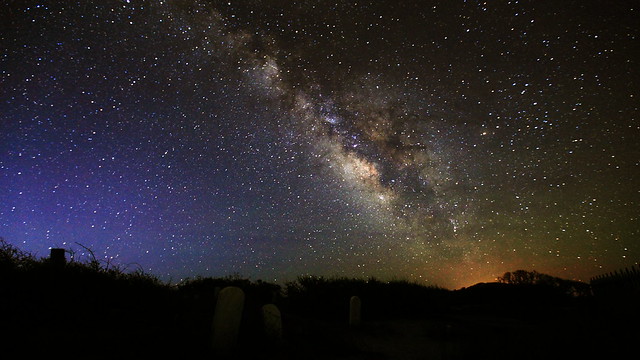 Upon returning from test shooting, I saw TSO Photography's “the Mountain” (vimeo.com/22439234). This was awesome, incredible astrophotography in action. This gave me the inspiration to find a lens with a wider aperture; so I rented the Canon 24mm f/1.4.

For “Night Motion Timelapse: Outer Banks” (vimeo.com/25023898), most of the astrophotography was done at 25s exposure, ISO 1000, with aperture settings ranging from f/1.4 to f/2.2. I don't like to use high ISO settings, (over ISO 2000), including astrophotography. I'd rather find another way, if possible.

The Milky Way shot below was probably the most single challenging shot from a pure photography point of view, it was good to have prior “lighthouse” experience. When you're shooting near a lighthouse, it causes terrible lens flare when you're wide open at f/1.4. I wanted to get the Milky Way, and I also wanted to see the stars through the field of light cast by the beam. Final setting: 25s, ISO 800, f/2.0. 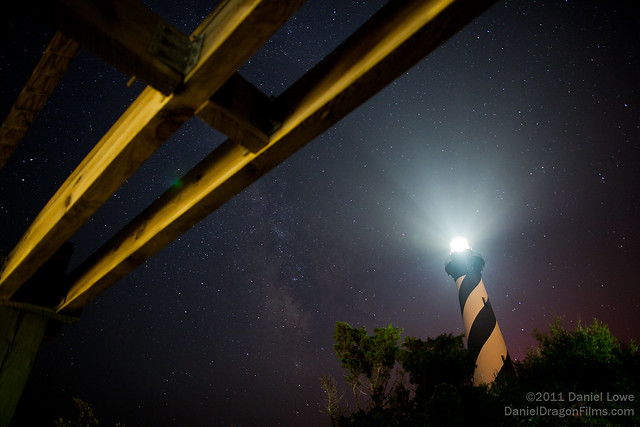 There are two car shots in the film, one astro shot that passes the camera through the sunroof on my car. The other is an out-the-back-window shot done by using the Dynamic Perception Stage Zero as a car mount.

The first night's shooting of astro-car sequences was completely out of focus, both stars and car. Originally I had planned a move out the rear window; but I realized the sunroof move would capture an action I'd done in my car many, many times on this trip already.. sitting in my car and looking up at the stars.

Same with the second car shot at dawn.. many times I had driven home around dawn and thought “this is beautiful!! but how to capture it?” I decided, the same way I was seeing it: from my car's point of view.

The second car shot was not challenging from a photography perspective, but instead from a purely physical perspective. Did I really want to mount my Canon 5DmkII and 16-35mm lens out the window at 50mph? Maybe.. Twice?

People ask about the lack of “flickering” in my shots…. there is no flickering because the entire film is shot with with Manual settings. The twilight shot with fire in the distance is done with Manual 15s exposures.

The very last shot of the film was completely spontaneous. I was driving home after the second car shot at dawn. The sky was covered with a smoky haze and an orange light; I saw wind turbines and decided to stop. The wind turbines reminded me of Tom Lowe; I had come full circle on my journey. 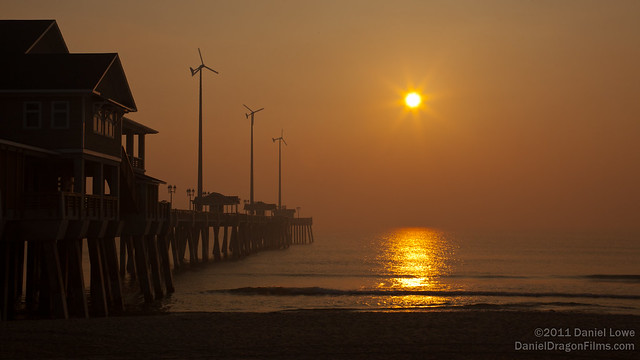 still prints and postcards of my work available here
fineartamerica.com/​profiles/​daniel-lowe.html

Email my work address if you would like to request any specific scene as a still.

Included are two shots of the Stumpy Point wildfire that has been burning in eastern North Carolina, U.S. for some time now. Most of the shots have wisps of smoke in the air from this fire.

The lighthouse is Hatteras Lighthouse, the tallest in North America.

The light streaks you see in the Milky Way shots are shooting stars, no airplanes this time. Shooting stars & meteors happen all the time all over planet Earth; you can't see them except in the darkest skies. Especially look for them right before dawn (in the film & real life), they seem to increase in frequency at that time.

All photo gear purchased from bhphotovideo.com